COVID-19 UPDATE: All PC meetings & Committee meetings will be via Zoom calls please Contact Us for registration to the call.

Langham and its history

There is significant evidence in the parish of very early settlement, including the sites of Neolithic barrows and a Roman farmstead.

Initial habitation and development seem to have begun in the north, on the site of the Hall and church. Farming began here and moved south, pausing for a while at the line of the Black Brook. In the Middle Ages, the land south of Park Lane was a Royal Forest and the last area to be farmed. However it seems clear that, by the midde of the nineteenth century, the commercial centre of the village was along School Road. 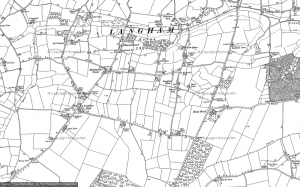 With no single centre of population, habitation is dispersed throughout most of the parish and there are still significant areas of agri­cultural land. Perhaps the most obvious feature is the extensive arable land (an airfield in WW2) in the centre area bounded by School Road, Wick Road, Park Lane and Moor Road. This large open space in the centre of the village gives the latter its unique character and is highly valued by all residents, particularly by younger people. There are industrial areas at Lodge Lane, Gun Hill and School Road and small business premises in Langham Lane, Old Ipswich Road and Park Lane. The remaining land use is agricultural or residential. The population in 2020 numbers about 1,000, spread through some 450 households.